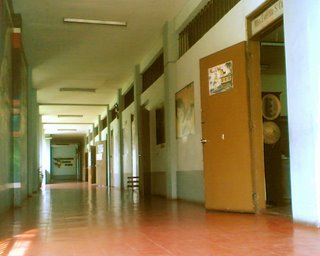 It was the height of the British invasion with The Beatles at the forefront followed by The Rolling Stones, Dave Clark Five, The Animals, The Kinks, Herman’s Hermits, and The Byrds.

Finally, there was music I could claim as my very own, as well as provide the soundtrack for the final two years of my life at Bonifacio Elementary School.

No longer did I have to piggyback on my older siblings’ choice of music, which, as if suddenly, ceased dominating pop radio's hit charts. Their idols such as Paul Anka, The Platters, Sandra Dee, Pat Boone, Bill Hailey, Jerry Lee Lewis and Elvis were being eased from their usual rotation slots; overwhelmed by the onslaught of these English rockers. A new era had begun.

As if by a stroke of luck, my vocal range and key signature matched that of Lennon perfectly and so I began to sing Beatle tunes to my heart’s content. I even auditioned for my cousin’s band. Although everyone was impressed by my rendition of I Saw Her Standing There, my image didn’t quite fit that of a real rocker. I still looked very boyish with my baby fat and crew cut (it wasn’t until high school that I began sporting a mop top). Hence, I suffered my first setback in my attempt to become a crooner. Notwithstanding, at my father’s business association dinner parties, I’d often ask the band if I could sing a Beatle song with them, which they would gladly oblige; making my father beam with pride of his youngest boy’s bravado, if not for his singing ability.

I was also of the age that my father decided to teach me how to handle a gun. He had quite a collection and enjoyed hunting immensely. His philosophy was, show the kids the proper way to handle it, as well as make them fully aware of its power to inflict great harm, and they would never foolishly touch it. He was right. It worked so well that none of us ever resorted to it or even owned one as adults.

However, I would tag along in some of my father’s hunting expeditions; not to shoot any helpless animals, but to pinch the key to one of the jeeps and teach myself how to drive while they hid behind some bush acting like big-time swashbucklers from the movie, Gunga Din. Those poor wild boars — unwillingly playing the role of the Thuggees — never had a chance from their powerful scope-equipped Remingtons.

As for puppy love, I had one earlier on; during the second grade to be exact. Unfortunately, her entire family immigrated to America and saw her no more. While during fifth grade, I had an awful crush on my religion teacher, which was doomed to be unrequited from the start anyway. So, love had to wait until high school.

All these and other personal experiences provided the material for the short stories I was tasked to write in school. My sixth grade teacher noticed my nascent interest in storytelling so she nurtured it by giving me an extra assignment — to write a short story every week to be read in front of the class every Friday after recess.

The first couple of times I failed miserably at amusing them. The entire class just sat there quietly staring at me. They weren’t transfixed by my short story that was for sure, because relief was etched on their faces as I returned to my seat. After much thought, I decided to be just my usual self and write funny stories about everyday life.

My teacher was kind enough to give me the leeway to pick and choose any subject, which included the time the designated Maria Elena at our barrio’s Flores de Mayo nighttime parade eloped, and as a last chance replacement, my brother was grabbed to step in her place. He was a small guy with handsome features so, with just the right make-up, wig, gown and borrowed shoes from an aunt, no one noticed it was him, not even my father — until the local young men who were smitten by his beauty and mystery hounded him all the way back to my aunt’s house. That brother of mine suffers from Napoleon complex and would later thrive in the U.S. military service.

And so it went with everyone in class usually ending up coiled in fits of laughter, including my teacher who was nearing retirement age at that time. To me, she was my only true audience; the rest was just there along for the ride, so to speak. To see her clutching at her belly and wiping the tears off her eyes as she laughed uproariously was worth more than any class ribbon or medal. I graduated as the undisputed Best Boy in class, not because of my dazzling brilliance, but of my talent to make my classmates laugh whole-heartedly. Actually, I felt more like a Beatle than an Einstein.

But instead of being overjoyed by it all, I felt a strange tinge of sadness — like it was about to rain on my parade.

On my graduation day at Bonifacio Elementary School, my intuition foretold the end of this fairy tale-like existence; that a more true to life human experience — replete with angst and disillusionment — was right around the corner patiently waiting for me like strangers with candy. Turbulence now littered the path of my life’s journey.

posted by Señor Enrique at 1:46 AM

What wonderful memories you have of your elementary school. That was funny about your brother replacing the Maria Elena. :)

They were indeed fond memories, Niceheart , which I will treasure forever.

That's quite a recollection there. I'm amazed how you have fused all those stories into one entry yet still ginving the reader an idea about each event.

One of the best blog read this week, I bet.

I enjoyed your post erik.
I also had fond memories of my elementary days but i stayed in the public school just beside our home only up to grade 4.
In grade 3, I sat with Ronillo and when the teacher would go out of the room, we would sing our song "And I love you so"... No, i didn't love him at all but he was scared of me i think and when i taught him the song my father taught me.. he had no choice but to sing with me (we would be singing different parts and we had a duet)... our classmates enjoyed our singing though since they would always clap their hands...hmmm.. unless they were afraid of me too??? Nahh... i was a lovable kid even then..hehehe!

Many thanks, Rey! These memories are all fondly ingrained (in my soul) that to compose a short story from some of them seemed effortless. Like being in a zone or something. I'm sure you have similar experiences whenever you create your designs, or breath life into your comic characters. :)

There are also some memories -- although just as fully etched in my soul -- feel as if I still lack the courage to write about them. I guess, someday soon.

I guess, when drawing from a well of fond memories, it becomes a lot easier to weave an interesting tapestry, so to speak. :)

Let me put it this way, Beth -- there is nothing more arduous than to sing a duet with someone you're petrified of or dislike; not to mention that you'd be singing words of love. That's really tough to pull :)

I can only surmise that if there were any feelings of fear on Ronillo's part, it may be the fear that you might find out that he liked you and only get rejected.

And to think that your duets drew applause....hehehe.

I should know. I was always petrified of the girls I liked.

Nice to hear from you again Beth!