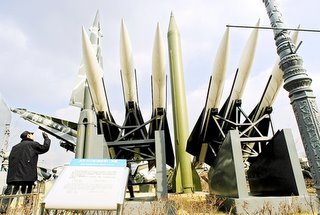 A statement released by the State Department in Washington confirmed that it apparently included a Taepodong 2, the long-range missile at the heart of diplomatic tensions with the U.S. and its allies.

Only last week, President Bush echoed earlier U.S. threats of a harsh response if North Korea went ahead with such a launch. Japan, on the other hand, stated it would "apply various pressures" but declined to give details. In response, on Monday, Pyongyang vowed to retaliate with an "annihilating" nuclear strike if attacked pre-emptively by the United States.

On Wednesday, North Korea did go ahead with its launch of several long-range missiles.

This incident only makes me think more about the London Free Press editorial, Let's Keep Our Earth Alive, which I found out through Lorimer's recent blog post. It’s about Stephen Hawking’s recommendation that we aggressively devise plans to colonize space for the survival of the human species.

Here’s the editorial in its entirety:

In case you missed it, the oddest scrap of news last week came from Stephen Hawking, the renowned English physicist who communicates with a letter-board-rigged computer because he's paralyzed by ALS.

Hawking said human beings are making such a botch of things, they had better colonize space, and fast, if they want to survive as a species.

"It is important for the human race to spread out into space for the survival of the species," he said. "Life on Earth is at the ever-increasing risk of being wiped out by a disaster, such as sudden global warming, nuclear war, a genetically engineered virus or other dangers we have not yet thought of."

Hawking, who was greeted like a rock star on a visit to Hong Kong, urged putting a permanent base on the moon in 20 years and one on Mars in 40.

Great. All we have to do is figure out how to grow carrots on Mars. The idea is science fiction; ludicrous.

But the idea behind the idea is not.

The world is in just as bad shape as Hawking says. The dangers are real. They're immense: - Global warming is already being felt. Young people of today will live to see a world unimaginably transformed -- for the worse. - Just because there hasn't been a nuclear bombing since Nagasaki doesn't mean there won't be another. As former Prime Minister Kim Campbell pointed out in Ottawa last week, more than 20,000 nuclear warheads remain poised at hair-trigger around the world.

There could be one big Armageddon. Or a "little" nuclear war -- or several, any one of which would make 9/11 pale in comparison.

The priorities of this world are pathetically, perilously cock-eyed. The "war on terror" is all the rage, while polar caps shrink, arms bristle and the population explosion runs unchecked. Oxfam reported last week that 14 billion bullets are produced annually -- two for every person.

Hawking's right. This planet is in big trouble. Real dangers do loom on the horizon. We may be living in the century that sees the end of planet Earth as an inhabitable space.

But the answer isn't to go to the moon. It's to find solutions; to fight, and not go down without a struggle.

Where's the activism that once surrounded civil rights, environmentalism, peace? It's the people who must choose -- choose to do what must be done to keep this planet alive.


Coming from Sir Stephen Hawking, this is definitely no Cassandra-speak.

Nevertheless, those guys in Pyongyang better get their act together and stop playing this silly quien es mas macho game.

Dunno bro but Bush toying with Saddam who had firecrackers and fireworks in his arsenal kinda pisses a lot of people. These guys from Pyongyang are the real deal. They got the real stuff and somehow Bush wasn't too vocal with these guys but pounced on hapless Sadam in a blink of an eye.

Following BW's thoughts, one would wonder why then hasn't Bush pounced on Pyongyang if he did pounced on Saddam at the blink of an eye? The answer could be found in another question, "What's in it for the US?" Does N. Korea have vast oil reserves like Iraq?

Unless there is something big for the US, they wouldn't make a move. Which means the task of solving this issue lies in the hands of Asian countries, it's about time we got together and fix by ourselves the problems in our own backyard.

Consistent with Washington's philosophy of pre-emptive deterrence for the sake of global peace, the N. Koreans are a real threat! One reason why the Yanks are vaccillating on Korea is because of fear. These guys have the hardware to duke or nuke it out. They gain so much respect because they can inflict horrendous damage. The US ran over Iraq in one day - not much to boast about really. It's a detente mode once again, where things need to be resolved through negotiation and compromises.

Firstly, gentlemen, what surprised me most was the subdued manner Bush addressed this issue - gone were his harsh words.

Secondly, rather interesting that Washington is very careful that this growing tension is not perceived as a strictly US-North Korea issue so, it is encouraging multilateral talks instead of one-on-one. Washington is now also seeking the support of the UN to impose sanctions on North Korea, BUT China and Russia expressed non-support of such if ever there should be one. And so Washington sent its assistant Secretary of State to Beijing to establish dialogue over there.

Whether the current nuclear arsenal of North Korea has capablity to reach US territories or not, what's even more troubling is how this whole thing develops, because surely Iran is watching it with great amusement.

Remember Bill Cosby the comedian? He once suggested not to make poor people angry, because "they got nothing to lose." And this is the reason why I think Pyongyang can be arrogant, annoying and completely indifferent. They have nothing to lose?

And the US has nothing to gain if it goes into war mode with N Korea. You actually think that the US will spend billions of dollars and US soldiers lives just to fix the N Korean issue without some real benefit?

Precisely why Bush is all ho-hum on the current missile test.

As of the moment, the missile test's failure says we have nothing to fear from the north as of now. They simply don't have the technology to make missiles that could actually reach the US mainland. It's a different story for closer neighbors.

Well, it really is a game N. Korea is playing here. From what I understand, Pyongyang officials want a one-on-one dialogue with Washington so they would be able to ask for what they want -- incentives, aid, and whatever else, including scientific know-how for their nuclear power plants.

Question now is, will Washington eventually give in?