FADE INTO THE NIGHT 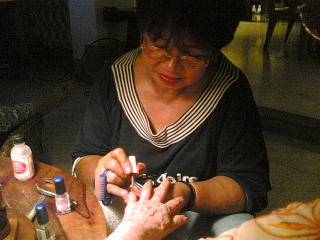 She will be coming home late again tonight. After punching out from her day job as a janitress with a bus company in Caloocan City, Ate Luming will be stopping by at a client’s house in Quezon City to do her nails. The extra income derived from this nightly home service is quite good; however, it isn’t so much for the money that she does it; it is more to keep herself busy.

It has been three years since her husband of 23 years bid her goodbye for a younger woman. Although she had accepted such fate, still comes a time when loneliness sets in unexpectedly; making her yearn intensely for the warmth of his company. What made the separation difficult for her to accept was the fact that her husband, Nick, was a decent, loving husband; even providing for her seven children from a previous relationship as if they were his own.

Ate Luming was only 16 when she fell in love for the first time with an 18-year old, Eduardo. There was no marriage, for her parents did not approve of this young man. Although they fared well from their coconut business and had no significant financial problems to speak of, Eduardo, precipitated by drunken stupor, would brutally beat Ate Luming, and then have her submit to his sexual demands, bloodied and all.

This was an ongoing episode throughout her relationship with Eduardo; a classic case of a battered wife. What made matters worse was Eduardo’s mother asking her, for the sake of the children’s welfare, to cope with the beatings. As they say, the fruit does not fall far from its tree, and this woman, too, as it turned out, suffers a similar fate from Eduardo’s father, the tree.

It took almost nine years of anguish and four of her front teeth getting bashed in with a coconut before Ate Luming gained the courage to escape from this sado/masochistic relationship. With the help of her parents, she absconded and hid somewhere in Davao. She left the children with their father; there was never any incident of child abuse before and after she left him so, she was comfortable with that decision.

Leading a life of freedom as a single woman, she took a vocational course in cosmetology at a local academy. Eventually, at 25, she met Nick, who was two years her junior. Contrary to the common phenomenon that women end up marrying someone exactly like their ex, Nick was a complete gentleman. A couple of months into their blossoming relationship, he demonstrated his sincerity and love for Ate Luming by asking her to marry him. She accepted. They moved to Manila and spent the next two decades enraptured by their love for one another.

All things must pass as elders often remark and so did this relationship. On her 52nd birthday, she spent almost three hours at a beauty parlor getting the works, so to speak. Later on that evening, wearing a brand new dress and matching shoes, Nick took her out to Kenny Rogers for dinner. Three days prior, Nick had mentioned something important he wished to discuss with her. Over dinner on her birthday night was the appointed time for it he said. Ate Luming excitedly anticipated some special gift was in the offing.

That evening, as she was enjoying a plate of juicy roasted chicken with mashed potatoes and some kernel corn, Nick calmly revealed the truth; there is another woman. At that instant, the whole world seemed to have stood still for Ate Luming; even a piece of chicken lodged momentarily in her throat causing her to frantically grasp for air.

Tears flowed as she vaguely listened to the rest of what Nick had to say. Her mind was spinning; unable to accept the reality of it all. Earlier, she was as giddy as a school girl expecting a special birthday gift from Nick; now completely shattered by her husband’s revelation of having another woman.

Nick also told her about his desire to get out of their 23-year marriage. He blamed it all on their childless relationship. Now at 52, he was telling her this. Had he mentioned it ten years ago, she could have given it a try; would even consider dancing at Obando Church, if needed. She was sizzling with indignation at this point, but still remained quiet. She was hoping that her silence would earn her the mercy to make him change his mind. Later on that same night, Nick packed up and left.

As for Ate Luming, a 350 ml bottle of San Miguel gin became a constant companion; providing a nightly source of comfort during the following six months since his departure. Aside from the pains of losing Nick, Ate Luming also had to endure the shame of a failed marriage in which she blamed herself for it.

Subsequently, as she overcame the anger of losing her husband, she regained the inner strength to accept the situation. She had also developed a more forgiving spirit for her husband, as well as for herself. There are still bouts with sudden tears, especially during the holidays, but she has managed, for the most part, to get on with her life.

Tomorrow night, she has on her schedule a client in Malabon desperately needing to have her nails done; thus, she will come home late as usual.

Self-Help Feature: How to Forget About an Ex
http://www.ehow.com/how_61_forget-about-ex.html