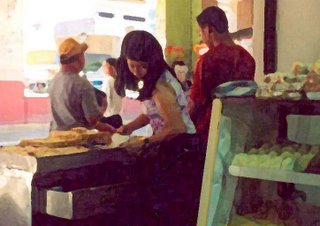 Fourth of nine children, Nenita was forced to leave home and venture to Manila to find a job and help her poverty-entrenched family. She was miserably homesick, longing to go back home, but had no choice in the matter.

Her father, only in his forties, was a strong man but too afflicted with a passion for brandy and cockfights. He would waste his money earned from the harvest on foolish vices instead of providing for his family.

Her mother, a 'modern-day Sisa,' would often plow the fields herself whenever her husband was too hung over from the previous night’s carousing, which was almost always the case.

She would supplement their meager income by doing laundry for the rich families in town, as well as clean their houses on weekends. In the afternoons, she would take bets for the local jueteng bookie if Don Castillo had no work for her at his vast sugarcane field. No wonder she looked way past her actual age of 38.

The older children were tasked to peddle her homemade rice cakes that she would prepare before the break of dawn. That would be around three in the morning because by five, she should already be in line at Mang Berting’s to rent a carabao to pull her plow.

Nenita was only 16-years old when her boat docked in Manila. To make her of legal age for employment purposes, her cousin Charing got her a birth certificate to state her as such from one of the document wizards of Recto. And after updating Nenita’s measly wardrobe at Baclaran, they went to see Chinita, Charing’s gay beautician friend, to give Nenita a wicked makeover.

By the time she was introduced by Charing to her friend, Milang, who worked at a bakery in Divisoria’s Tutuban section, Nenita has been transformed from a provincial peasant into a young woman of beguiling beauty. Her shyness only enhanced her alluring charm. Nenita was immediately hired by Mrs. Chan, the notorious bakery owner from hell.

She fancied carrying a folding fan -- to cool her with, as well as to keep her workers in line. Once snappily folded back, she could surprise any one of them –- with an upside whack on the back of the head with military-like precision –- should they displease her for any reason however petty, that is.

Anything above the scale of petty -- aside from the customary surprise whip -- any offender or slacker would also be harangued by Mrs. Chan for about 15 minutes in some funky cocktail of Mandarin and Tagalog, with a couple of Biblical verses in Elizabethan English thrown in for good measure.

It was a bizarre language of her own concoction that only she could understand. Its purpose was to discombobulate -- obliterating the victim’s sense of purpose for living even if for a few minutes -- delivered in rapid-fire unintelligible bursts an octave beyond her usual range.

It was so sonically annoying her workers would much rather receive 40 lashes from her folding fan rather endure this heinous linguistic torture.

As for the folding fan, it actually didn't inflict much pain. It was the surprise element that was nerve-wracking; always eluding even a senior worker’s gut-feel radar. One worker eventually mustered the courage to file a case with the Department of Labor. She complained that she had stopped lactating due to stress from Mrs. Chan’s stealthily devious fan-whips.

The judge ordered Mrs. Chan to compensate the complainant with P75,000.00 for her pain and suffering. Mrs. Chan defiantly accused the local justice system of favoring breast-feeding, baby-breeding factories. She was fined another P50,000.00 for contempt.

“I don’t care. I have money!” she screamed back at the judge while pointing her dreaded folded fan at him. The judge wisely avoided staring at it as a Turkish peon would to an evil eye medallion.

“Good riddance!” she said about the worker who quit and went back to Bohol with her P75,000.00 in compensation.

Despite her judicial setback, Mrs. Chan’s irritating disciplinary methods went unabated. She went on to take much pride in having mastered such techniques purportedly inspired by her idol, Jiang Qing, and her revolutionary treatise on cultural reforms and mass discipline.

Meanwhile, back in Bohol, upon arriving home from Manila with her baby, Nenita bought her mother a carabao of her own and invested the rest of her P75,000.00 on a piggery business. She gave her father zilch.

A month or so later, after graduating from college, the baby’s father followed Nenita to Bohol to marry her. It was Hamilton, Mrs. Chan’s youngest and most handsome favorite son.

Nenita’s father has gone back to plowing the fields.

Sisa, a character from Jose Rizal’s Noli Me Tangere
http://www.hawaii.edu/filipino/Related

Jiang Qing, founder of the Gang of Four, wife of Mao Zedong
http://en.wikipedia.org/wiki/Jiang_Qing

It is like, all is well that ends well...