LECHON FOR THE BIRTHDAY MOM 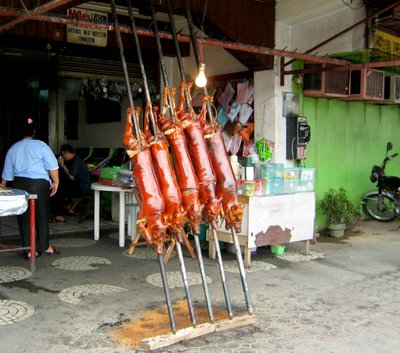 When I asked her what she would like for her birthday, she simply said lechon. Metro Manila’s lechon central over at La Loma, Quezon City is only a few minutes away so lechon she’ll have.

She's in relatively good health, though no longer able to tango or rhumba, but she has always been proud of the fact that she can eat anything she desires; unlike some friends with dietary restrictions. She does, however, suffer from bronchial asthma intermittently, though not at alarming frequency.

I had originally planned on taking her for a day trip to The Field of Faith in Laguna, which I discovered though Cathy’s blog entry. However, it has been raining during the past weekends.

We'll just stay home for her birthday and invite over a few friends and relatives. We’ll take her to Laguna another time when the weather is more conducive for her to do so.

posted by Señor Enrique at 7:12 AM

Its really good that your mom is in good health and enjoying life and food! And as they reach these golden age, we should really cherish every moment with them - as what you are obviously doing!

Happy Bday to your mom! And wishing her all the best!

My main concern is that she is in good spirit all the time, which is not so hard for me to do since she keeps a positive attitude about things in general.

Happy Birthday to your mother!

88 ! Bata pa!
My grandmother went to 104 without any health problems. I wish the same for your mother !

Mama's father went beyond 90; but her mother died much earlier. However, as long as she remains in good spirit, I trust she'll have a few more years to be up and about, though no more limbo rocking. Those days are ovah! :)

The lechon looks so good.

I read your comment at Cathy's post. I've been wondering why you gave up NY. That is so unselfish of you to bring your mother back home where she could be more comfortable. I don't know that many people who would do that. You just gained a new respect from me.

Once again, happy birthday to your mother.

Happy birthday eric's mom! I must agree with niceheart, the lechon looks good. :-)

Wow... 88 and still going strong. I hope I will see my own mother thru that age too. I miss my folks back home..

Oh, and the lechon looked really good I wanted to pounce on them. Please say the natal greeting to your mom for me eric.and congratulate her for raring one fine indiviual.

Happy birthday to your mom Eric! God bless her!

Many thanks for the birthday greetings everyone!!!

That's only half the story, Niceheart hehehe ... I also wanted to take a break and smell the roses, so to speak, especially after having gone through that traumatic 9/11 ordeal; some friends/colleagues perished from that event.

Thanks, Rey for the nice words :) And thank you, Ladybug and Beth!

*Happy 88th b-day to your mom Eric.* (sorry for the late greetings I was out the whole day).

Yes, the lechon looks inviting and La Loma is famed for it.

Pahinging lechon! :) Happy Happy 88th birthday to your Mama! Tango and rhumba are difficult dances... I'd be surprised if she could still do that at 88. But it must have been lovely to watch her during her younger days. Did she teach you how to dance as well?

There you are, Ipanema! I was wondering what happened to you? You're usually one of my early morning visitors, and you weren't anywhere to be found this morning :)

Thanks you ... the lechon looks good but I only like the crispy skin.

BTW, notice anything new about my site's description tag??? hehehe.

She was dancing and partying on til about five years ago ... hehehe. I prefer freestyle dancing than ballroom, though it's wonderful.

Hey, do they have lechon in Cambodia, too?

Yes, finally you got it there. It's better, you don't have to explain your reminiscing. copyright that. :)

Where was I? I attended a one day symposium! I may blog about it sometime cuz it concerns one of the hotly contested global issues and I was moderating 2 parallel sessions. Tiring. I arrived at 6.30 p.m. (no time difference with Manila).


You're right, I'm one of your early customers. I'm an insomniac. Sorry for the late posting of all comments today. I may hit the sack in a few, wake up later perhaps 12 or 1.


When I'm in Manila,i go dancing dun sa conservatory (mla pen). It's a cosy place. May live band sila. I dont know the best places nowadays. We used to go club-hopping from morato-greenhills-makati...lol. I miss those days. It was fun. :)

Passed by Manila Pen but it was raining so I couldn't snap a pic of it for you :(

Oh, I'm sorry to hear that, Eric. I guess every New Yorker know at least one person who perished in 9/11. Very tragic indeed.

i hope i'm not late to greet and for the lechon. :P

It was indeed horrible, Niceheart. It was like going though a war.

Thank you, Jepaperts. It's turning out to be an entire weekend long celebration so, you weren't late at all :)

I came in late. Anyhow, belated Happy Birthday to your Mom.

May God bless you both.

It's a bit late but nevertheless Happy Belated Birthday to your Mom!

I heard that lechons are very nice and there's a special sauce for you to dip in. It reminds me of our roasted pork here in Malaysia though.

Yes, Kyels, it is served with a special sauce, which I like. Love the crispy part of the lechon the most.

What do you call your Malaysian version of our lechon?

Thank you for your birthday greeting :)

Ours is similar to the lechon there in Pinas but the color is slightly different because it's roasted. And we do not take it with any sauce. It's roasted with charcoal and the meat can be used to cook with vegetables or fried with garlic and leeks; many more other ways to cook it.

We don't have special names for it but we call it "roasted pork" most of the time.

Have you tasted our lechon sauce? If not, when you come over for a visit, we'll make sure you get a taste :) But then again, go to Chinatown instead! hehehe.

Lechon is one of the many foods that I'd like to taste. And I know there's this famous chocolate called Chocnut! Darn it, I can't wait for December!

Choc Nut? Hahaha! That happens to be my favorite. I'll give you some!

I miss lechon sooo much!

When did you leave NYC? My husband (then fiancee) was living there during 9/11. I would take the Greyhound from Boston to visit him every other weekend.