This is an oasis in the midst of Makati’s business center — Greenbelt Mall; a wonderfully-designed sprawling commercial complex. Its overall architecture was designed to blend with its surrounding landscape; retaining both its urban and natural characters unlike the ubiquitous fully-enclosed monolithic template of SM Malls. 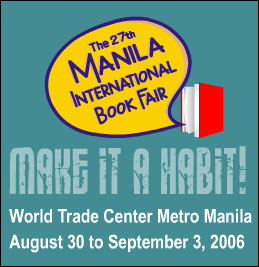 I must admit, found out about this only recently through micketymoc’s Stepping on Poop site. If you’re planning on going, please let us know; we might all hook up or something.

posted by Señor Enrique at 6:17 PM

AAAAAAH!!!! Greenbelt, Powerbooks, and bookfairs are the EXACT reasons why I'm homesick for Manila! :(

Ahhh ... Toe, that was exactly the plan -- to post an entry about Greenbelt and books to make you really homesick so you'd come rushing back home and bring us some KRAMAS!!!! hahahaha!

What a beautiful oasis and so near a book haven...This time, no one should ask that perennial theoretical question: What book would you rather have if you are trapped in a huge desert?

It's really a nice complex, but most of the shops are a bit pricey.

Nice landscape. I think it has sort of a soothing effect.

Enjoy your time at the book fair.

I just noticed that your 'Greenbelt Mall' and 'Power Books' links both have "www.blogger.com" inserted in them.

Thank you for pointing out the URL errors, Niceheart; just corrected them :)

Yes, this place is really nice -- a must to visit when you come home with the family for vacation.

I will blog about the book fair!

I like these type of posts, and the photos. The other day I was looking at satellite maps on Google, trying to find our old house in the Philippines. It was tough because I only remember small bits about the Phils. So these posts make me nostalgic, and also help me remember old places.

I know, BUT for those hard to find books, this may be the place. I have these three books that I'm looking for and may find in the fair:

Hoping to find them at this fair!

I'm glad to be of service then, Aurea. Worry not, I'll keep posting pics that may be of interest :)

Eric, ah ganon! Was that your evil plan? :) Actually, I was hoping you'd be in New York in September since you seem to know so much about the place... your hometown pa nga. And if you took us around, I'd be more than happy to give you a handful of kramas. :)

I'd hate to go to Barnes & Noble because I don't have the budget to buy books. :(

I'll be there! Not sure on which day yet though, but I do hope to bump into some of you. This will be my first book fair and I'm pretty excited. Kinda strange I haven't been to any before considering I'm a bookworm and am always lamenting the lack of public libraries in this city.

Have you ever visited www.avalon.ph ? I got my Kite Runner copy there for only P200, secondhand (I love second hand books). :)

Please, if any of you know of good libraries in Manila, let me know. I'll even buy you a donut and coffee for it! :)

If ever ou'd find me in NYC, Toe, it would be most probably in spring or summer; not September because that's the month I'd usually start feeling kinda blue. Septemeber means autumn, and this season heralds the upcoming cold weather lurking around the corner.

They usually have a huge selection of bargain-priced books over at any Barnes & Noble (mostly publisher overstock); you needn't have to spend much! For cool esoteric titles (even second hand), try Strand downtown south of 14th Street by Union Square.

Christine, there's this cool- looking library I sometimes drive by over at Lacson, Fugoso Library. Haven't been inside, but it's tempting.

Thanks for the URL.

Have you asked Vonjobi of Filipino Librarian?

Not sure which exact date I'll be at the book fair, but will let you know.

hubby and I love Greenbelt too :)
it's not to crowded, no need to worry about the "mandurukot" which is rampant in Megamall now, love the shops and the toilets are always clean and with ample supply of tissue. oh, and the restos are superb!

Yes, this is really a nice place! Love it.

However, it doesn't have Juan Soy anymore :(

I'll have to check that out, thanks Senor!

I've to admit I'm a bookie. Damn, wish I could attend the book fair though.

I'll keep an eye out for local libraries and let you know, Christine.

Yes, I'll see to it that I get a chance to attend the book fair, Kyels, because I have a couple of books to look for!

Aha! What books are you searching for?


These are basically the books I'm looking for, Kyels.

i love greenbelt and i love powerbooks! good thing the latter transferred to its present location from the one in pasay road. it wasn't very accessible then.

Hi Eric! I posted a comment here about 2 days ago ... anyway, I love bookstores too and when I am in Manila, my first stop is either Fully Booked in Rockwell or Power Books in Greenbelt and I go back to these places everyday till it's time to fly back to Bacolod. And I feel sad that I'm missing another book fair ... the last time I went to one was more than 5 years ago!

I can imagine why you love Greenbelt, Vina -- it is really a nice place!

Didn't know about Power Books at Pasay Road, but I'm glad they had moved to Greenbelt.

That often happens to me at other sites, Bugsybee ... I will post a comment and on my return visit ... nada! hehehe. Must be a Blogger foible.

Bacolod is such a thriving city, Power Books ought to open a branch over there.

bookstores are my favorite places to hang out. powerbooks of course here in manila. i've been to nyc 4 years ago and i just looooooooove barnes and noble! i remember walking down broadway with my brother (from 42nd until canal street) and i practically stopped at every bookstore in sight hehe. i might go to the book fair this friday... i hope i hope!!!

Times Square to Canal may seem like a long arduous trek, but the city has so much interesting shops and street going-ons that one is easily entertained and amused during those long walks.

Barnes & Nobles stores are great BUT did you happen to stop by Strand at Union Square? Great collection of new and used books they have! If not, don't miss it next time you visit NYC -- it is worth visiting!

yes, i've gone to strand two times actually. found a book about tintin (as in tintin's history, not the comics). it's just too bad i didn't buy the book the first time around. love the musty smell of the basement levels. :-)

Ok, you have it pretty much covered then, Carla. BTW, Conrado de Quiros, the columnist at Philippine Inquirer, also loves exploring Strand whenever he goes to NYC.

Oooops ... there is one other bookstore in the Diamond district; forgot its name now, but will dig it up and share with you.