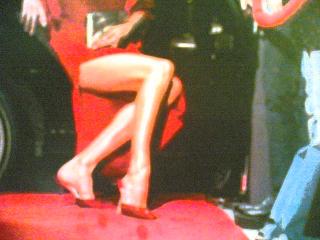 Although Layla has all the accoutrements of a grand dame, she is tired of the senseless shopping sprees, lavish dinner parties, and exhausting travels to outlandish places. She is tired of getting all dressed up but without any important place to go. Worst of all, she is tired of being alone.

As she has learned to accept her husband’s infidelity, she has also learned to wallow in similar wicked behavior. It doesn’t really matter whether her husband, Charlie, knows about it or not. At first she did it to spite him but now it’s to recapture pieces of her lost youth.

Her latest lover is Carlo, a once popular teen heart-throb. Lacking any foresight to invest some of the big bucks he raked in as a teen star, he spent his money as fast as he made it. Old at 19, Carlo began a 4-year descent through a local actor's hellish circles: minor roles in low budget movies, guest shots at mundane TV shows, and hosting insipid entertainment shows at the malls. Broke and a has-been at 23, Carlo could only settle for the next best thing usually offered to a fading star -- a kept man.

Calloused by years of desperation, Layla would only shrug off her husband’s caustic remarks about her expanding waistline and sagging breasts. No longer were there tears to hold back. She would just ignore him like leftover food stuck at the deep end of a refrigerator shelf. Unable to share genuine innermost feelings with each other, she and her husband live a life of repression and denial; finding solace from material possessions and illicit affairs.

Her Chinese husband, ostracized by his clan for his ill choice for a wife, is a self-made man who made his fortune in precious metals. Layla, a former beauty pageant queen of Bacolod, once loved him dearly but Charlie loves his money even more. A casualty of romance, Layla sees no meaningful purpose in her husband’s life other than to look glamorous -- paraded like a prized trophy at her husband's business functions. She doesn’t even remember the last time they had sex.

The security that Charlie’s money provides is not the reason she hasn't left him. There has never been any crucial need for her to leave, because Charlie is never around anyway. Even when he’s home, they hardly see one another in their sprawling mansion. They run more into each other at the gas station than in their dining room. They are as good as separated.

Using extended business trips as excuse, Charlie would be gone for weeks on end, spending time with any one of his mistresses. And to appease Layla, Charlie gives her a generous allowance, regular gifts of dazzling jewelries, and a brand new car every year. He had also bought her a couple of condominium apartments to add to her own investment portfolio.

Aside from the sports sedan that Layla allows Carlo to use, she has also given him a set of keys to one of her condos so he could live there. Carlo also receives a substantial amount of spending money on a weekly basis. How long this arrangement will last, nobody knows. It all depends on how long Carlo can continue to satisfy Layla’s carnal desires. Actually, it has only been a year since they hooked up, but lately, Layla’s mind seems preoccupied by a new prospect. Carlo is becoming a little too familiar and predictable; no longer as sexually stimulating as he used to be.

There is someone new that tickles her fancy, Jasper, the part-time ball boy at the tennis club. Weeks of inconspicuous flirtations eventually paid off. Much to the boy’s delight, she had arranged for them to spend a weekend together in Tagaytay next week. The boy sees Layla as a potential ticket to attaining his college diploma. Layla sees the boy as her new toy.

As for Carlo, when it’s over, Layla will give him a generous gift of cash, get her keys back for the condo and the car, and pass him over to her gay hairdresser in Greenhills. A less brutal option is for Layla to buy him a plane ticket to Los Angeles where Carlo could peddle ridiculously-priced pots and pans to homely Filipina nurses -- a career stratagem for faded Filipino stars. Such is the life of a kept man in Metro Manila.

Charlie is in Moscow trying to close another lucrative deal. From there, he will proceed to Geneva to explore a new business prospect. Carlota, his new personal secretary is with him on this trip. From Geneva, they plan to spend a week in Paris and a week in Monaco before heading back to Manila. On the other hand, Layla and Jasper will have enough time on their hands for a couple of weekends in Tagaytay before Charlie comes back. Meanwhile, Carlo will start a new relationship with the gay hairdresser or he could be off to Los Angeles to begin a new career in cookware marketing.

Together, Charlie and Layla enjoy a life of great affluence, but the wasteland in their soul seems too abysmal to be fulfilled by their wealth and lovers for hire. Separately, they move from one beautiful person to the next in search of that special someone to warm their cold hearts. Ironically, this sort of searching is the only thing they have left in common. Such is the life for a windswept couple in Metro Manila.