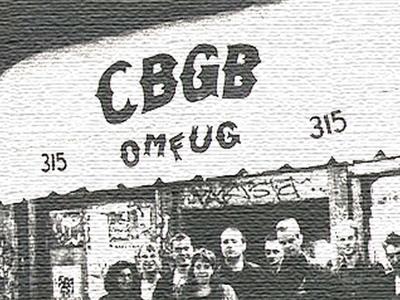 Ever since it was announced that CBGB might lose its lease and close its doors on the Bowery, a number of people have rushed to defend the club's merits, praising the sound system, the slanted stage, the iconoclastic owner, the long list of bands whose careers began there. But a significant architectural feature has been forgotten in all the tributes - namely, the club's bathrooms, which David Byrne once described as "legendarily nasty."


Bleecker Street, in all its deeply wack splendor, literally ends at CBGB's doorstep. So it's fitting that this bar, which took a chance on a shitty band called the Ramones and thus midwifed the punk-rock revolution, is the archetypal Bleecker Street rock landmark. For better or for worse, the lifestyle of the modern hipster was born here. Seeing music is almost beside the point: If you're not standing bunched together with strangers; if you don't leave with a beer spilled all over your new shirt; if you don't visit the most godforsaken bathroom in Christendom, then you haven't really been to CB's. (A more conventionally pleasant time is to be had in the downstairs lounge.) —Rob Kemp

posted by Señor Enrique at 2:16 PM