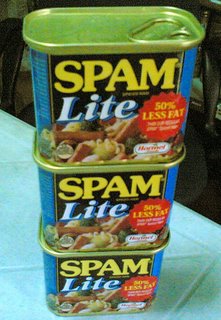 When SpamJam in Glorietta opened with great fanfare—touting Spam as its main ingredient in most of the dishes on its menu—I could only say to myself, “They have got to be kidding!” Well, apparently not; the place remains open to date. Its owner must have struck a chord with the Filipino’s insatiable penchant for it.

Supposedly, over five billion cans of this pork-shoulder-and-ham concoction have been delivered across the globe, and 3.6 pieces more are churned out every second by Hormel Foods.

Some New York friends seemed revolted when I used to bring my lunch of Spam sandwich prepared at home. These were friends whose fathers fought in the war and most probably had nothing to eat but Spam while fighting the Nazis or the Japanese in the Pacific. So, they had grown to dislike it intensely, and after the war, passed on their disfavor of it to their young; much like an aunt who refused to eat any more bananas after coming down from the mountains during liberation, and refused to have any of it inside her house ever since.

But a more poignant if not outright tragic piece of family history that involved Spam also occurred during the liberation period when Macarthur’s men had just finished carpet bombing Manila into smithereens.

An uncle who adroitly escaped the death march in Bataan and hid up in the mountains of Subic, Zambales was exuberant upon learning from another guerilla contingent that the Americans planned to make a couple of food drops in the area. These were crates filled with emergency medicines, blankets and foodstuffs. At that time, the area was not fully secured by the GIs from the Japanese forces.

One night, upon seeing a crate parachuting from a plane, he precisely gauged where it would land and ran over to the area to meet it. Unfortunately, the other guerrilla unit failed to inform them to stay away from a food drop until it has landed; its sheer weight could burst open the crate, and its contents of canned goods could become deadly projectiles. Well, lo and behold, a can of Spam hit my uncle right smack on his forehead which almost cracked his skull wide open.

How did they know it was Spam that did him in? Well, the can itself was semi-embedded on his forehead when he was later on found sprawled on his back—his mouth agape and eyes open with horrific expression. The can of Spam was nestled firmly on his forehead as if contrived for an advertising photo shoot for Life Magazine. It was a closed casket service, but the Spam was fried and served along with other foods right after his burial.

Be that as it may, our family never espoused any resentment against Spam and would always have a couple of cans readily available along with some sardines and corned beef in the cupboard. My uncle’s tragic rendezvous with a can of Spam was considered an unfortunate happenstance, but no minute of silence was ever deemed necessary to observe whenever we enjoyed Spam with garlic rice and slices of tomatoes or as pandesal sandwich.

posted by Señor Enrique at 7:17 AM

Dropping by from Pinoyblog. Interesting Spam story you got here. Didn't realize Spam is part of the Filipino history. And yours for that matter.

Thanks for the visit!

Lol! Amazing. Dropped by from browsing in PinoyBlog too. :P

I should write about my aunt who got to hate bananas :)

Thanks for the visit, Ysabella!

That was really unfortunate of your uncle.

We also always stock up on Spam,
(well not that particular brand name), and corned beef.