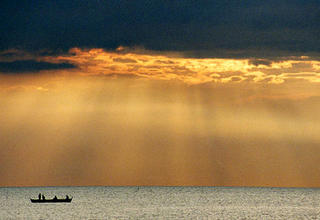 After The Storm
Photo by Joaquin Zamora
Joaquin’s intention with a camera as he puts it is “in the hopes of capturing scenes that would never repeat themselves and to find order in the midst of chaos.” This somehow reminds me of the artist, Marcel Duchamp, whose use of chance factor in shaping a work of art had a profound influence on the development of abstract expressionism in painting, indeterminate music, and much of the conceptual art of recent years.

Whereas, Joaquin’s photographs remind me of what English visual artist, Russell Mills, once wrote about T.S. Eliot; “In his critical and analytical writings, T.S. Eliot has often suggested, in diverse permutations, the possibility that the poem a reader reads may appear to be better than the poem the poet has written. While an author may consciously imbue a piece of writing with specific meanings, a reader’s interpretation of that writing cannot be predicted. Similarly, this then can be applied to visual images beyond those that the artist has consciously embedded within a work.”

As I then searched my mind for appropriate words to describe my personal reaction to Joaquin’s photographs, I was surprised to have come up with only a single word, in Italian, bellissimo! It was the same exact word I shouted from the grandstand when Andrea Boccelli finished belting out Por Ti Volare (Con Te Partiro) at Araneta Coliseum.

The principal translation of the word bellissimo is very beautiful (wonderful). It is a fitting word to describe Joaquin’s body of work, for it reveals the beauty that already exists within his soul as an artist, and in which his photographs reflect. In essence, his beautiful photographs are mere extensions of the beauty within him. Anyone who could make a pretty picture out of a rusted screw or evoke a spiritual experience from captured sunsets deserves such accolade.

I thought I’d end it here until I was suddenly reminded of what I once read about the poet Baudelaire. He suggested that “the truest response to a work of art, the purest act of criticism, was to produce a second work of art in a different medium.”

Hmmm … I no longer have my keyboard, drum machine and sequencing software; stuff I used when I dabbled in electronic music ala Brian Eno. The only work of art I can offer is this blogsite. It isn’t much of a canvas or sheet music, but it’s the only medium I have at the moment for self expression; a work in progress.

Salamat po, Joaquin, for sharing with us the beauty that you see in this world.


I consider Joaquin as among my newly-discovered friends or kindred spirits at flickr.com whose talents and photographs never cease to amaze me. To view Joaquin’s fine collection, click on the following sites:

posted by Señor Enrique at 1:03 PM