THE MEANING OF NO 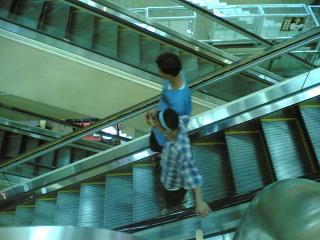 Funny thing, friendship. You spend a lifetime nourishing it but with only a single misunderstanding or misdeed, it can suddenly cease to exist. And only in very rare occasions could an altruistic act of forgiveness resurrect it.

Jepoy and Jekwah are best of friends; more like symbiotic twins, for one couldn’t seem to exist or be seen without the other. Those are not their real names received at birth, but nicknames, or more appropriately, terms of endearment given by one to another.

It all started at kindergarten when Jekwah would cry every morning as he refused to go to his classroom. His older brother, Julian, who was at the sixth grade, would plead with him to act like a big boy, but to no avail. They would always end up as two lone souls in that vast empty schoolyard; the other students already inside their respective classroom. Teacher would look out the classroom’s window and from a distance see Julian crouched in front of his sobbing little brother; wiping off the tears with his handkerchief. Having children of her own and of the same age, she felt better than reprimand Julian for his incessant tardiness.

It wasn’t until Jekwah befriended a classmate, Jepoy, when he felt safe and excited enough to willingly attend his class. Jepoy named him Jekwah because he was a crybaby, and Jekwah named him Jepoy because he immensely liked champoy (Chinese in origin, champoys are bittersweet nuggets enjoyed as snack munchies).

With their houses not too far from one another, their friendship grew beyond the confines of the schoolyard. They soon included each other’s siblings, as well as their respective playmates as parts of their widening circle of friends. Both boys even summered at each other’s home province. When they graduated from elementary school, they enrolled together at Arellano High School, also a short walking distance from their homes.

And so life went on as usual for these two boys until one summer morning. Jepoy, already a fifteen-year old with raging hormones, was acting much too feisty. He had a crush on this pretty long-haired girl , Lisa, who recently moved in the neighborhood. She gave Jepoy her cellphone number the night before and asked him to check back with her the next day. She would know by then if her parents had given her permission to gallivant at the mall with her friends.

Unfortunately, that morning, Jepoy's cellphone indicated a zero balance on his prepaid load. He rushed over to Jekwah’s house to borrow his. Jekwah, waiting for an important reply from his father, said no. However, if Jepoy could wait awhile, he assured him that he could use his cellphone right after he heard back from his father. However, awhile seemed forever to a boy smitten with what could be his first love. He was in no mood to accept a no for an answer. He badgered Jekwah hoping it would annoy his friend into giving in. It was a futile attempt; Jekwah placed too much importance on hearing from his father.

Jekwah had placed his cellphone on the side table next to the sofa where his friend was seated. And when his attention was riveted to some anime program on TV, Jepoy, with arm’s length reach, grabbed the cellphone. Somehow the cellphone slipped from Jepoy’s grasp. It smashed on the tiled floor. The battery flew from its case from the sudden impact.

Jekwah’s eyes teared with rage. His most treasured possession lay shattered on the floor. It was a birthday gift bought with pooled money from his parents and brothers. It was the latest Nokia model at that time, a 6600.

For the very first time in his young life, Jekwah verbally assaulted his best friend with venomous curses. His mother had to make a sign of the cross upon hearing such vile words spoken inside the house. She was certain hardened criminals in maximum security would cower into submissiveness if lashed with such filthy, degenerate language. Jekwah came close to landing a fist on his best friend’s bowed head. He opted instead, on that fateful day, to declare Jepoy persona non grata. Word soon spread in school and the neighborhood about the bitter end of this childhood friendship.

A couple of months later, one morning, two weeks before Christmas, calamity struck this fairly quiet neighborhood. Three houses were swiftly razed to the ground by a fire caused by faulty electrical wiring. One of the houses was Jekwah’s. After the fire was finally extinguished, the entire family was on the street blankly staring at a spot where their house used to stand. His parents were visibly distraught. They had no idea where to seek temporary shelter or find a home where they could relocate. Their senses were too debilitated to think and act coherently.

Jekwah sat on a bundle of meager remnants they managed to save from the fire. All he was able to save for himself were whatever clothes he had on and a pair of worn-out slippers. Everything else he owned was engulfed by the flames. Jekwah’s slumped body and bowed head conveyed utter desolation. He was staring mindlessly at a pebble on the ground when suddenly a pair of familiar looking Nikes appeared within his peripheral vision. He didn’t have to raise his head to figure out who it was; he was too enfeebled with fear and self-pity to acknowledge his presence. Did he come to thuggishly mock and vilify him in revenge, he asked himself.

Jepoy fell on his knees facing him. He then wrapped his arms tightly around Jekwah. It was an embrace Jekwah had never felt before. It spoke a thousand words, mostly healing words buoyed by a spirit of forgiveness. And when he did start hearing actual words from his estranged friend, they were an invitation for him and his entire family to stay at Jepoy’s house until a suitable place was found. Jekwah broke down and sobbed. You’re a real crybaby, Jepoy teasingly whispered to his ear.

After dinner that night, while their mothers cleaned up the kitchen and their fathers enjoyed a bottle of beer, Jekwah thanked Jepoy for having forgiven him. Jepoy, in turn, thanked Jekwah for having taught him the essence of the word no. He realized it was the hardest word to say, especially to a friend. He then acknowledged the consequences of his ignorance and infantile behavior which precipitated Jekwah’s anger; even admitting how miserable it was to lose a true friend over the simple word no. The long silence that followed was broken when Jekwah invited his best friend out for a walk and perhaps, see where their house once stood. Jepoy gladly obliged.

And so it was in the neighborhood since the fire. Jekwah’s parents were able to build a new house on their property and the two boys, as before, are often seen together; always engaged in some animated conversation as they walked by the row of houses and mom-and-pop stores in the neighborhood. They are now in their final year of high school and both boys intend to pursue studies in software engineering together at a nearby college. They are conspiring to someday become the next Steve Jobs and Steve Wozniak or Bill Gates and Paul Allen. Jepoy and Jekwah are confident they can achieve this dream.

posted by Señor Enrique at 1:30 PM