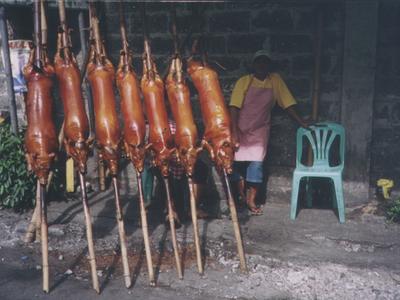 Being it’s Sunday, the day in which most festive gatherings are held, posting a Food Feature seems appropriate. And nothing better to start this off than with our national food, lechon; the delicacy most of us Filipinos would rather stay away from but couldn’t.

Some claim it as Chinese in origin while others say it’s a Spanish cuisine; that leche means milk in Spanish and lechon meant suckling piglet. Whatever its provenance, for some coronary artery bypass grafting veterans, lechon means the culprit.

Be that as it may, to this day, a party wouldn’t be grand without having one as its centerpiece. Such is the power of lechon in our cultural psyche. Not only are these succulent roasted pigs esteemed with their very own parade in Balayan, Batangas, but more recently, in La Loma, Quezon City as well.

The turkey, although an American holiday staple, doesn’t have its own parade in New York. Thanksgiving Day Parade, yes; Turkey Parade, no. More power to the lechon!