MY LIFE WITH A DOG 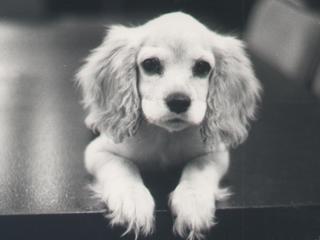 Right after a friend gave me a puppy for my birthday, my brother handed me a calling card of a psychiatrist who specialized in treating patients having difficulties in coping with the loss of a beloved pet. He advised me rather sternly to keep the card because I might need it someday. However, I was too excited for having this puppy to be bothered by some grim prospect, but I kept the card anyway.

Another good friend, paid for the puppy's obedience training. However, two months into it, I had it stopped. He was becoming a little too disciplined; acting like a grown-up dog. Also, he seemed terrified by his trainer whom we suspected in jest of harboring Gestapo sentiments. After about a week of not seeing Hans the trainer, he began to enjoy his puppyhood once again.

Named Niko Burrito on his American Kennel papers, I took him along with me to work during the first three years of his life. As he became more socially adept with people and other dogs, so did I; we got invited to silly dog birthdays and other bizarre Manhattan private events for dogs. In the end, Niko seemed happiest when it was just the two of us strolling at Central Park.

He had his medical and periodontal check-ups on a regular basis. His veterinarian was rather grumpy and abrupt with people, but simply amazing with animals! For his grooming needs, a gay couple who operated a pet salon in Chelsea took care of that. And if I were too busy to take Niko myself, for a fee, they would send a dog taxi to pick him up. My doorman would fetch Niko from my apartment and hand him over to the driver. I would then pick him up from the salon right after work. If the weather was good, we would walk home from Chelsea.

As for his apparel needs, he had ample supply of sweaters, raincoats, trendy collars, and rubber boots to protect his paws from the salt used to melt the snow. Almost all of these items were gifts, though. I would be too embarrassed to walk into one of New York’s specialty pet boutiques to rummage through doggy clothing and accessories. Except for the sweaters, he hated the rest, especially the frivolous costumes he had to wear to doggy theme parties. It was a struggle to put that stuff on him. Eventually, we managed to avoid attending those parties by hiding out at my brothers’ house in New Jersey during the weekends.

In return for all these, Niko showered me with unconditional love. He was the only one I ever lived with who easily forgave me for my shortcomings. Living with Niko also gave me the wisdom to never ask any single Manhattan female to choose between me and her pet dog.

Cocker spaniels usually have a lifespan of only 14 or 15 years, but thanks to his highly skillful but grouchy veterinarian he lived a longer and a healthy life. I never felt any need to call the psychiatrist on the card my brother gave me. I knew I took good care of Niko, like a parent would to his child. Also, we had lots of fun times together.

When the time is right, I’ll get a new puppy.

How to House-Train a Puppy
http://www.ehow.com/how_32_house-train-puppy.html

posted by Señor Enrique at 3:00 PM

What a lovely story. Have you got a new puppy/dog yet?

My mother had one as well, but since the dog died two decades ago, she never did had another one. I think it is the trauma of losing a "pet". Dogs are such forgiving companions and friends.

No, not yet, Mario. Mainly because having one is a lot of responsibility. It's like having a child, actually. But they give back much love also :) I can imagine the great loss that your mom felt when her dog died. As they say, only dog lovers would really know.

Perhaps, when much older and more homebound, I'll get one to keep me company.

I love dogs... their love is unconditional really. I remember my dog Kisses who died 10 yrs ago. She was my bestfriend, my baby during my growing up yrs. My mom and dad are not so affectionate and their works made them grumpy.Im longing for some attention from my parents but they seem cold and distant.. But kisses filled up the void. Everytime Im lonely I just hug her and I'll be fine.. she got uncanny wisdom and she knows if Im sad and lonely.. she's simply the best!

When she died.. I dont wanna have a new dog coz she's simply irreplaceable. I grieve her lost as if some part of me lost forever. A part of my childhood was forever gone. I got a prety bad childhood but her presence reversed all that.

Now Im a grown up man. but whenever I remember her like now, I cant help but cry, coz everytime i remember her.. i also remember the boy who have nothing.. a beggar for love and attention.

sorry for my melodramatic comment.. just carried away hehe!

No need for apology, Jhay. Your sharing is most appreciated, actually. As they say, it takes a dog lover to fully understand the bond between a pet dog and his/her master.

Yes, Niko also sensed those times when I was feeling under the weather, and the things he did to take my mind off my worries were truly amusing and endearing.

Just like you, my deep appreciation for Niko's company for 17 years may be holding me back from getting a new dog.

Many thanks again for sharing, Jhay!